Willow Goes Acoustic in Cover of Yungblud’s ‘The Funeral’: Watch 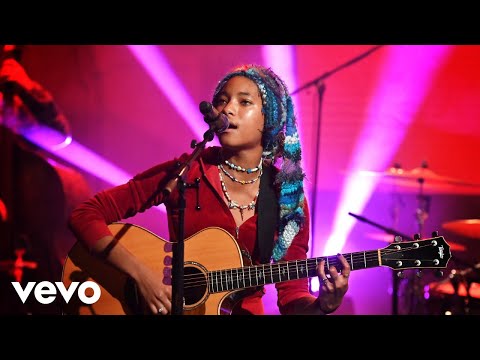 Willow Smith took the stage at BBC Radio 1’s Live Lounge on Thursday (Sept. 29) as part of the stations Live Lounge Month series with her unique spin on Yungblud‘s “The Funeral.”

The 21-year-old “Like a Goddess” singer sported a red velvet jacket, a multicolor beanie, several necklaces, blue jeans and boots, transforming the track into a smooth acoustic sound, differing from the original pop-punk number.

“I’ve been dancing at a funeral/ Waiting for your arrival/ I was hoping that you’d look beautiful/ Dancing in tears/ But nobody came/ What a shame, shame and shame,” the star emotively sang during the chorus.

Smith’s performance was also well received by fans who flooded the comments section of the video to praise her. One user wrote, “Wow! She has found her own voice,” while others noted a similarity in Smith’s voice to Florence Welch (of Florence Machine), who is best known for tracks like “Dog Days Are Over” or “Shake It Out “.

“I just love the lyrics,” Smith said of “The Funeral,” according to NME. “I love just the vibe that he’s giving on this song. It reminds me of Billy Idol. I love the vibe [Yungblud] gives off. It was a song I learned on an acoustic guitar some months ago.

Smith even allowed fans to see her thinking process when she was arranging her performance. “I had to bring out the upright bass, y’know… give it a different vibe,” she said to NME. “Doing it in such a different way… it just fills my heart. I’m so happy

Smith didn’t stop with her performance of “The Funeral” — she also gave the crowd a performance of her powerful vocals with her recent single “Curious/Furious” from her forthcoming fifth album Coping Mechanism, which is set to arrive on Friday (Oct. 7).