The B-52s’ Perform ‘Love Shack’ on ‘Kimmel’ Ahead of Farewell Tour: Watch

If you figured The B-52s had just one big rocket in their cannon, then take a good hard look at yourself.

Then, more than a decade later, an unlikely slew hit. In 1989, when Trent Reznor’s Nine Inch Nails announced its arrival, house music was sweeping the U.K. and Europe, and grunge was on the way, the B-52s delivered more goods with “Roam” and “Love Shack”.

The party is over for the self-proclaimed “world’s greatest party band”.

After 45 years of performing and more than 20 million albums sold, the finishing line is in sight, in the form of a farewell tour which kicks off late August.

The band’s three surviving members will hit the road for at least 15 shows across 11 venues in the United States, with more dates expected to be added in the next few weeks.

But first, a tune up. Fred Schneider and Co. stopped by Jimmy Kimmel Live on Wednesday night (April 27) for a performance of “Love Shack”.

Come on! Bring your jukebox money, and let’s watch the video below. 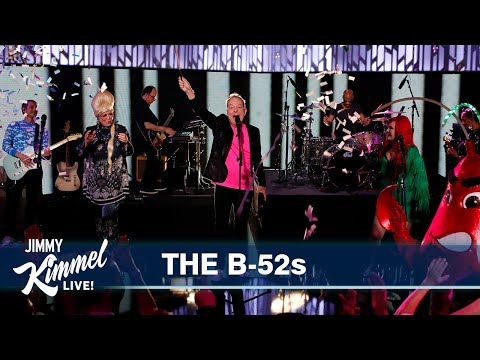