Megan Thee Stallion is a self-proclaimed “number one” fan of Stranger Things, and she took advantage of her co-hosting role on The Tonight Show Starring Jimmy Fallon to ask the Netflix show’s star Natalia Dyer some burning questions.

Dyer, who plays Nancy on the sci-fi hit series, was initially asked by Fallon on Thursday night (Aug. 11) if she’s “Team Jancy or Stancy,” referring to her character’s love triangle with Steve, played by Joe Keery, or Jonathan, played by the 27-year-old actress’ real-life boyfriend Charlie Heaton.

“I want Steve,” Megan jumps in passionately, before hilariously beginning to interrogate Dyer on Nancy’s romantic decisions. “Let’s talk about it, though. So, boom, at first you like Steve. You was into Steve!”

“Yeah, Steve, what a guy!” Dyer agrees, before the “Plan B” singer continues, “But then, you kind of just dumped him. No caution. He didn’t know what was happening. Poor Steve. Y’all keep throwing the kids on him, the babies. He keeps saving y’all life! All he do is safe y’all life!”

At this point, Dyer is in hysterical laughter, responding, “I do feel bad. Honestly, I think the way that Jonathan and Nancy happened — she doesn’t always make the most morally right decisions all the time, but that’s human, you know?”

When Fallon began to bring up Maya Hawke’s character, Robin, and the “ronance” between Dyer and Hawke’s characters, Megan Thee Stallion simply was not done getting the Stranger Things tea. “Do you miss Barb?” she asked, referring to Nancy’s best friend played by Shannon Purser who was tragically killed in the first season by Demogorgons. “Bring Barb back, hashtag that!”

“I’m never allowed to forget about Barb,” Dyer replies. “I get it! It’s part of Nancy’s arc. It definitely drives her forward. Has she completely dealt with it? I don’t know, but we have not forgotten about Barb.”

“This is a lesson to friends everywhere,” Meg tells the audience. “Do not be a third wheel because Demogorgons will come get you.” 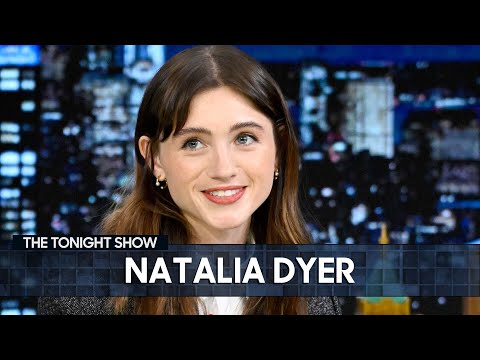 That wasn’t all the fun Dyer had on The Tonight Show set with Megan Thee Stallion. Backstage, the Stranger Things actress got to feel like her friend Barb and meet some “real life Demogorgons” when she came across two of the rapper’s French bulldogs.