Remember when the Black Eyed Peas had the music industry in a veritable chokehold? Saturday Night Live certainly does.

On Saturday’s (April 16) episode – for which Lizzo was both host and musical guest – one skit imagined an Interscope recording studio circa 2008 as the pop-rap quartet recorded two of their biggest hits: “Boom Boom Pow” and “I Gotta Feeling.”

Chris Redd, Bowen Yang (Taboo), Kenan Thomson (will.i.am), and Cecily Strong(Fergie), perfectly portray the Peas. Aidy Bryant and Lizzo play their producers. As will sings the “boom boom boom”s of “Boom Boom Pow,” Bryant explains that those were just meant to be “temp lyrics describing the beat of the track.” Lizzo chimes in: “Yeah, you were supposed to replace them with your own lyrics — you know, like words.”

Obviously BEP didn’t take any of the producers’ advice, and the rest is history: The pair of songs from This Is The E.N.D. owned the Billboard Hot 100 in 2009, with “Boom Boom Pow” spending 12 weeks at No. 1, only to be surpassed by “I Gotta Feeling” with 14 weeks up top.

Watch the skit below, and see the full episode on Hulu here. The streaming service is currently offering a 30-day free trial, which you can sign up for here. 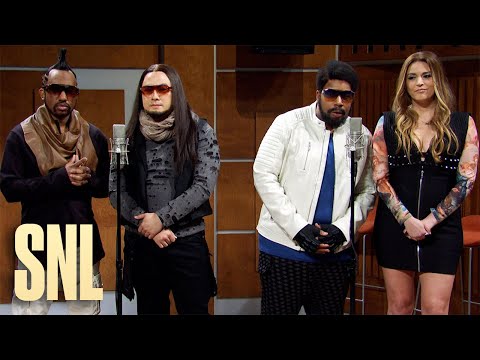