The 2022-23 LaLiga season arrived on Friday (Stream LIVE games and replays on ESPN in the U.S.), so what better time to see how the players are feeling about soccer in Spain and much, much more?

Having done five editions of Major League Soccer Confidential at ESPN, we decided to use the same template over the preseason for players based in Spain to get their thoughts about some hot-button issues in the sport, collecting their answers for our first edition of LaLiga Confidential. How do they spend time away from the pitch? What do they like to eat? Do they feel overworked? What rules would they change if they could? Which kits are their favourite? And which teams do they hate going to play the most?

For the first time, 18 of the 20 LaLiga teams — and 51 players — put up responses on the condition of anonymity. Also of note: Any photos, videos or illustrations used below are only representations of the answers we received.

Let’s get into it.

DOWNTIME: How they relax away from the field

Being a pro athlete means you’re constantly in the spotlight when you’re at work, doing your job, but how do the stars of LaLiga spend their time when they’re not on the clock?

1. What TV series are you watching right now?

What the players said:
“I don’t know its name. I watch anything my wife is watching.”
“None. I’m not a huge fan of watching TV series.”
“I’m more of a movie guy.”
“When my TV is on, I just watch football.”
“I’m watching ‘Prison Break’ for the third time.”

2. Do you play the FIFA video game? 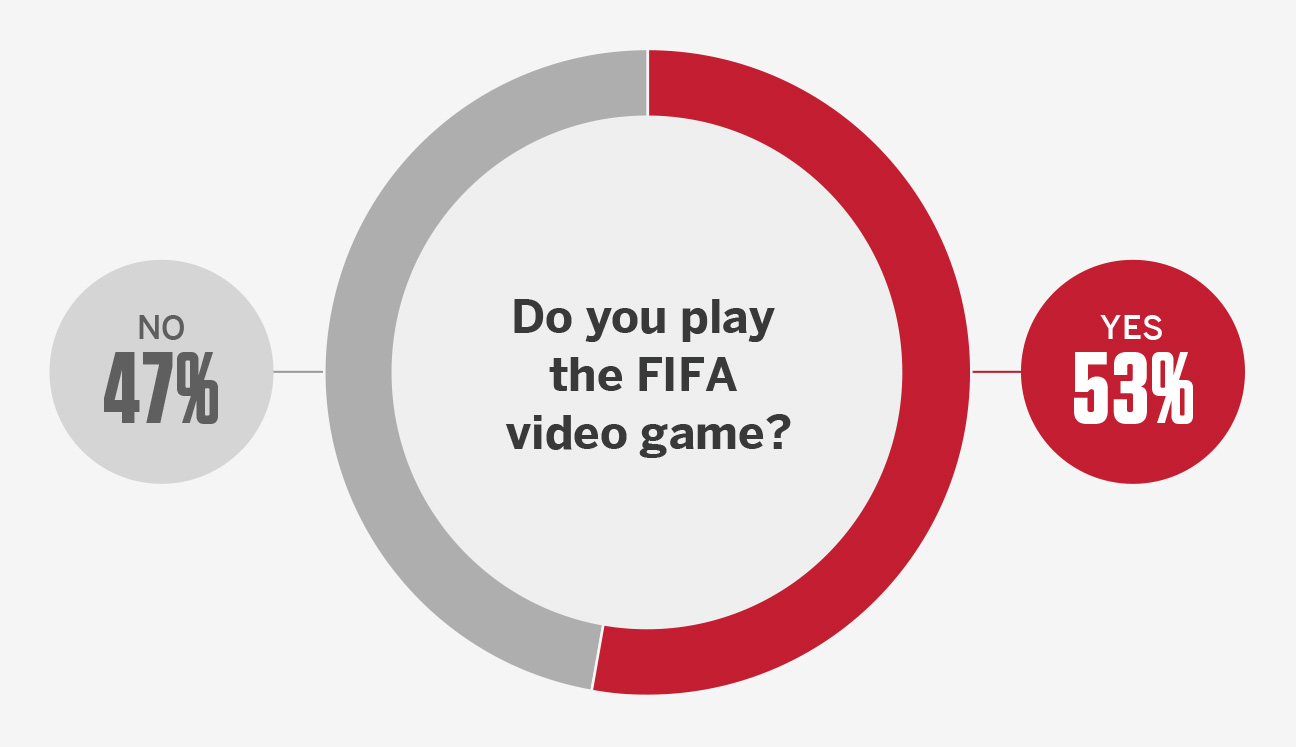 What the players said:
“I don’t play it anymore; I got mad a lot of times.”
“I play very little. I play it less and less.”
“I don’t play video games anymore, but I used to play FUT Champions.”
“Sometimes. I choose my team and pick myself.”
“I play with my brother sometimes. I usually choose Manchester City.”
“I play a lot of FIFA. I use my FIFA Ultimate Team and choose Betis.”

3. What topic do you talk about most with your agent?

What the players said:
“Your relationship with your agent is very important. You need a crew around you to protect yourself from the outside world. I just like to be focused on football.”
“We talk about personal and professional issues. Sometimes, we talk about investments.”
“Our professional relationship only has a short time; so, we talk about my brother and my professional business.”
“About restaurants, houses and postmatch grades.”
“Personal stuff. We’re friends since we were kids.”
“My parents are my agents, so we talk about everything: life, football, family …”
“About things to do when my playing career is over.”
“We talk about everything I feel like talking about, but rarely about my present or future. I don’t like to think about it.”
“About everything. He’s like a friend to me.”
“Not much.”

4. You get one meal today. Choose one of these traditional Spanish dishes:

It’s game day, so which are the teams and opponents that players dread facing the most? How about their favourite kit? (Spoiler: It’ll mostly be their own.) And what do they think about LaLiga games being played on foreign soil, as well the number and lateness of matches in a season?

1. What’s the toughest stadium to play in Spain?

*Other: RCDE (Espanyol), Ramon Sanchez-Pizjuan (Sevilla), Reale Arena (Real Sociedad), Mestalla (Valencia) and All of them

What the players said:
“The Bernabeu is imposing because it feels like you have the fans on top of you, and it will be even more impressive once they finish the rebuilding.”
“The Bernabeu is a stadium with plenty of history, and it’s special to play there for any player. Those of us who have played abroad see it like some of the traditional stadiums in England, where fans are very close to the players.”
“San Mames, playing as a visitor; Athletic fans are special.”
“There are plenty of tough stadiums to play in; all supporting bases play a crucial role. However, I fell in love with El Sadar.”
“They are all tough.”

2. Who has the best kit in LaLiga?

*Note: 73% of players picked one of their own club’s kits.

What the players said:
“It’s always my team’s kit, but I really like the yellow of Villarreal and Cadiz.”
“Celta and Barcelona. Both are very nice.”
“The Real Madrid goalkeeper kit.”

3. Which opponent makes you think: “Wow, he’s too great?”

What the players said:
“Luka Modric and Pedri. They figure plays out one second before everyone else.”
“Nabil Fekir. What a player! We played Betis at home and away, and I asked him for his shirt after the game. I always knew he was a good player, but when I was on the pitch … he had a lot of quality.”
“Karim Benzema has made a difference this year.”
“Any Real Madrid player, especially Toni Kroos.”
“The vast majority. I couldn’t choose just one, but when you face Barca, Madrid … the level is even higher.”
“There’s such a high level of play that any player can make you have a hard time.”
“Nobody. Because in football, everybody can win against each other.”

4. Should LaLiga matches be played in foreign countries? 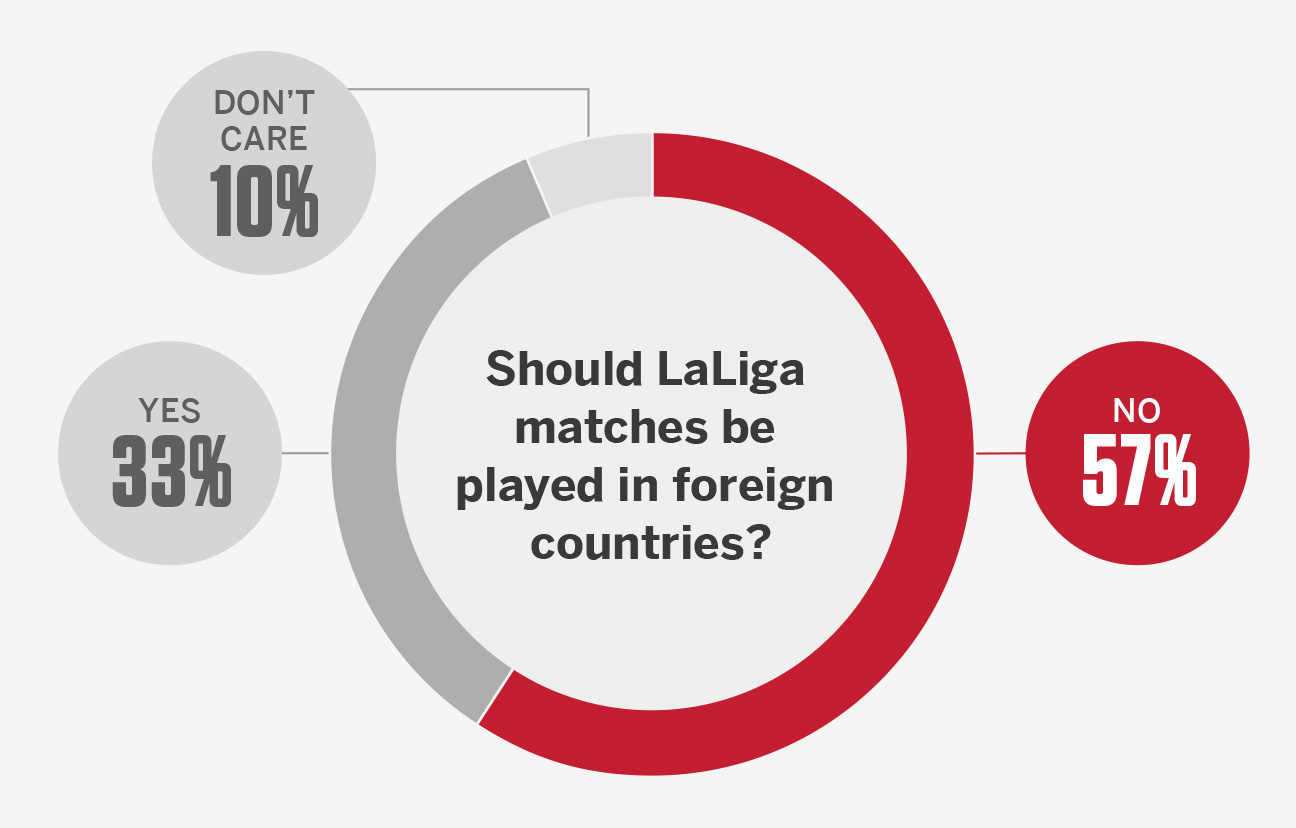 What the players said:
“Why not? I think that it’s done in other sports, such as the NBA, and it could help teams like us, that are not Madrid or Barca, to grow in other countries.”
“Yes, they should, if it helps in growing LaLiga. Why not?”
“It doesn’t matter to me. I just want to score as many goals as possible. But I think LaLiga deserves attention because it’s a great league.”
“I don’t think so. LaLiga should be played in Spain: Its supporting bases and stadiums are all here.”
“No, it would alter the competition, because it gives a disadvantage to the one who should play in its stadium and must do it outside of its country.”

5a. Has there been any point in your career when you’ve felt you have played way too much?

What the players said:
“There have been moments throughout the season in which we don’t have much time to spend with our family, especially at Christmas or when we travel abroad for the preseason. It gets tough.”
“I’ve been fortunate to play in the past in European competitions, and you must play there almost every two or three days. It’s especially hard when you have children and you can’t spend a lot of time with them because you’re traveling back and forth.”
“We’re being exploited a lot.”
“No, there hasn’t. It’s my profession.”
“Not at all. I work doing what I love to do. I love football and all things surrounding it.”
“I don’t even play on Thursdays, so I can’t say I play too much.”

5b: Does playing at 9 p.m. local time seem too late for you?

What the players said:
“Evenings are always the best time for me.”
“The Champions League is played at this time, and everyone watches it.”
“As a football player, I don’t think so; but as a fan, especially thinking about the children, I do.”
“It’s OK to play at 9 p.m. If you play too many matches, then [it might be a negative], but it’s all right.”
“It must be changed because we might end up exploding ourselves; 9 p.m. is not a very suitable time slot.”
“We get so little rest, so sometimes I feel like I have played too much. And that 9 p.m. time slot isn’t good at all.”

THE GLOBAL GAME: A wider look at football

Players have opinions about the wider game, as well, so what are some of the big issues for them?

1. Are you in favor of playing the World Cup every two years? 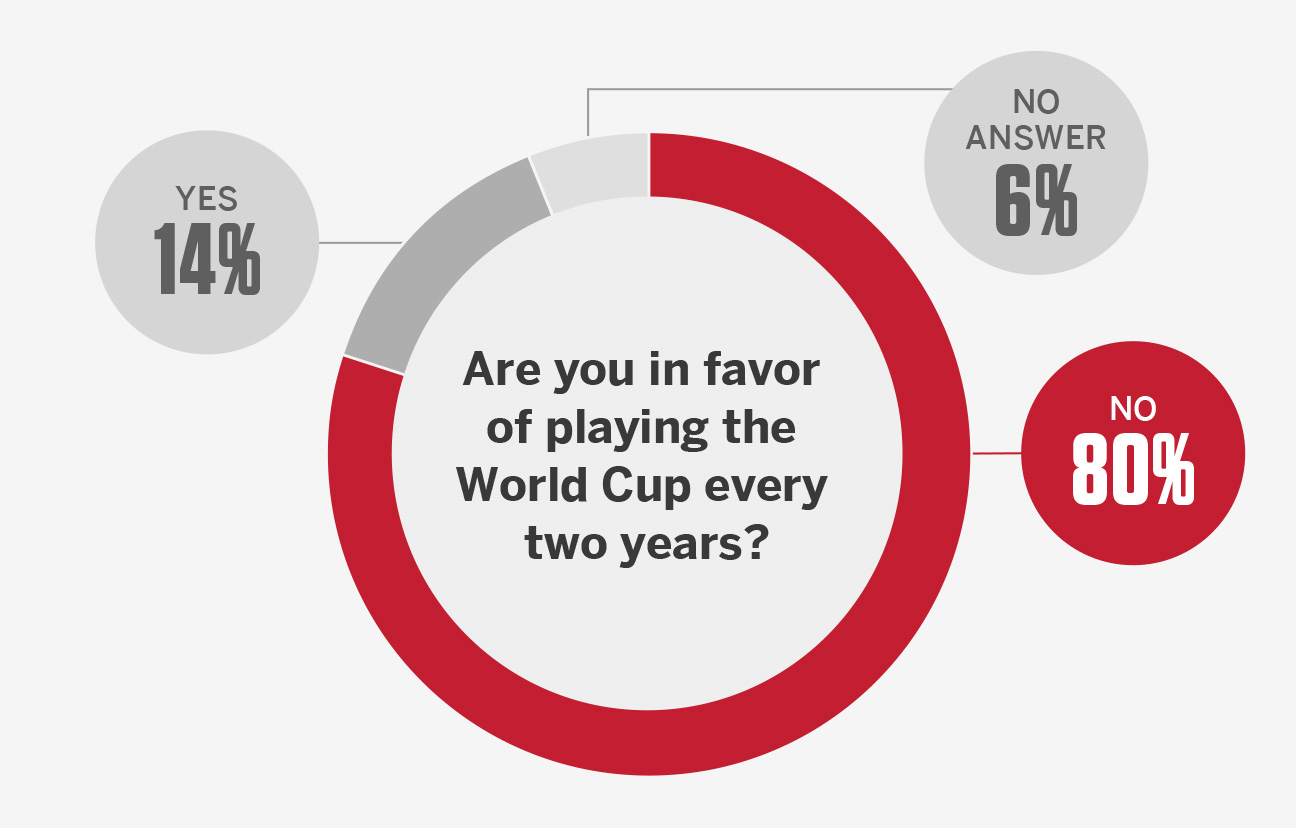 What the players said:
“It will detract some value from the world’s greatest competition if you play it more often.”
“No, I’m not. It distorts its purpose.”
“I think the fact that it’s played every four years brings more excitement.”
“I don’t understand why you would change something that’s working well already.”
“Football players have less and less rest and more and more matches. I think we should take more care of our health.”
“It would clutter the schedules for all of us.”
“It would depend on what they would do about the Euros; however, I wouldn’t change a thing.”
“Yeah, but I’d take away the Euros. There’s something about the Euros that’s nice, as well. But I wouldn’t mind having the World Cup every two years at all. There’s nothing more enjoyable than a World Cup on the international level.”
“There are fans that only watch football when the World Cup or the Euros are on, and we would gain more fans.”
“If my national team calls me up, it doesn’t matter.” [Laughs]

2. Which rule in football would you change?

*Other: Ability to protest versus referee; limiting substitutions; no limit to substitutions; remove suspensions after five yellow cards; remove penalty shootouts; put microphones on the refs.

What the players said:
“Handball rules. There are specific handball rules I don’t like because I don’t understand when it’s a handball and when it isn’t.”
“Handball inside the box because it’s not even understood by referees.”
“All the time you waste with the VAR.”
“VAR criteria. Often, players don’t understand the referee’s decisions.”
“I would play with a stopped clock. It bothers me when the opposing team wastes time, and that would be a potential solution.”
“The clock should be stopped, just like other sports. That way, we would avoid wasting time.”
“To make the minutes in stoppage time more accurate.”
“The offside rule. [Look at] the Eric Garcia play vs. France in the Nations League.”
“Penalty shootouts. They’re unfair.”
“Increasing penalties for contact with goalkeepers.”
“Any rule that goes against goalkeepers.”

3. How often do you fake or exaggerate a foul? 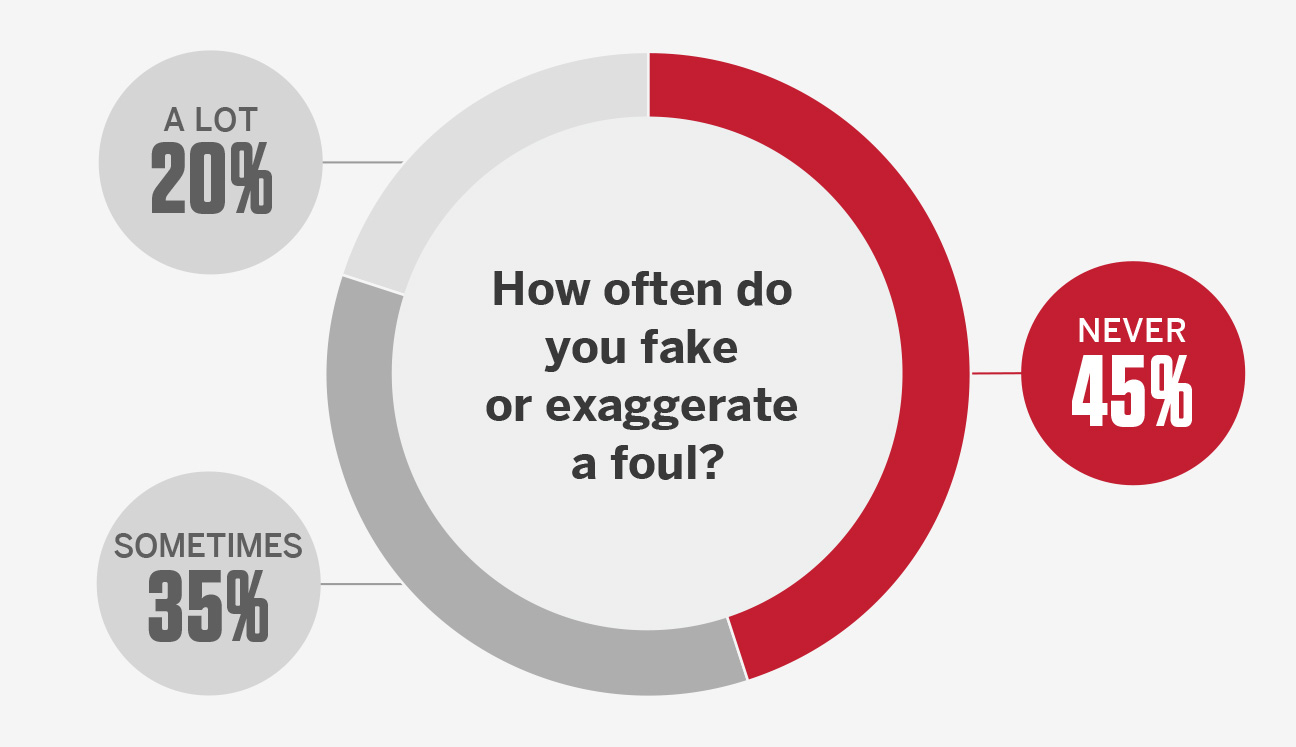 What the players said:
“I don’t like to do that kind of thing. However, it’s true that I’m a player that gets a lot of fouls because of my game and position on the field.”
“I don’t like faking fouls, and I don’t particularly appreciate my teammates doing it.”
“I never fake fouls. Sometimes, I exaggerate.”
“I never do. I get hit a lot, and hard.”
“I’ve never been the best at trying to fool someone.”
“It depends on the minute you’re playing in.”
“I do it, just like everyone else. In the final minutes of a match if we’re winning.”
“I always do … all the time.”

4. Beyond your team’s matches, how much football do you watch a week?

What the players said:
“I like to watch the teams where some of my former teammates play. Both in first and second divisions.”
“I always watch PSG. I’m a football fan. I want to become one of the best, and watching a lot of football will improve my skills. It can teach you a lot. I watch football not just to enjoy but to analyze. I watch my own clips to improve.”
“I only watch big matches, such as El Clasico or any Champions League matchup I like.”
“Between three or four matches, depending on my kids.”
“I used to watch three or four matches per week, but since I have kids, I watch less.”
“Not many. I try to disconnect from football when I’m off.”

The author of 5 books, 3 of which are New York Times bestsellers. I’ve been published in more than 100 newspapers and magazines and am a frequent commentator on NPR.

How Breanna Stewart’s move impacts the Liberty, Storm and the WNBA

Vandersloot to New York, the rise of superteams and a Liberty-Aces WNBA Finals?