Jackson Dean: May Country Rookie of the Month

With a sound older than his years and a gritty voice that has been burning up the country charts lately Jackson Dean making an impact with “Don’t Come Lookingin’,” the song is No. 23 on Billboard‘s Country Airplay chart and was featured in the hit series Yellowstone. The track was co-written by Dean and Luke Dick, who are well-known for their work with Miranda Lambert, Eric Church, and many others.

“We didn’t really have a title and were just in a block for two hours at his studio, just smoking and thinking,” Dean tells Billboard of the writing session for “Don’t Come Lookin’.” “We had that big thumpin’ vibe and I kind of mumbled something under my breath that I used to say to my mom, ‘If I don’t come back, don’t come looking.’ And he whipped his head around and said, ‘That’s what we’re writing today.’ But it was just something I would tell my mom if I was running off in the woods for a day or so. She would say, “Stay alive, no matter what happens,” and I would agree. It was just a small shot at each other for awhile, and it became a radio hit .”

As a child, the Maryland native worked for his father’s construction company. He also learned to play the guitar in the woods around his home, which is close to a swamp and a gun range.

” I spent more time there than with other people, really,” he said. “There was a gap between myself and my siblings so I was often by myself. Pops was at work and mom was the ‘el presidente of the company, so she was responsible for the payroll and the books. I was a little country kid, just worked my whole life and played all the sports.”

Back in 2018, as a senior at Arundel High School in Gambrills, Maryland, Dean offered up a moody, acoustic rendition of the national anthem during a football game and footage of the performance went viral. This led to Dean’s appearance on The Steve Harvey Show . He then released a few indie projects. Now signed with Big Machine Label Group, he released his debut EP last year, and in March followed with his debut full-length major label album, the 10-song collection Greenbroke, which Dick also produced. He has also signed deals with TKO Artist Management, WME to book and Little Louder Music to publish. Church and Arturo Buenahora founded Little Louder Music. 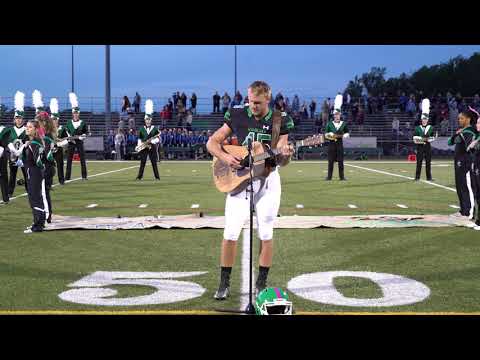 “We sold Rams Head [in Annapolis, Md.], three times in succession and started getting calls form booking agencies,” Dean recalls about his journey to build his team. As he was signing with WME, the agency’s Nashville co-head and partner Jay Williams “stepped out of the meeting and literally called Arturo Buenahora like 12 times,” Dean says. “I met Arturo the next morning and about a month later, got a pub deal .”

A record deal was also quickly reached. At Nashville’s The Basement East, Dean was opening for Dick. He says that there were nine labels present that night, including half heavy hitters and half dudes who couldn’t get them a big deal but were there to see the scene. According to Luminate, Dean’s music has been streamed 8.8 million times in the U.S. so far.

When did you discover you had a talent in music?

It wasn’t until middle school that I realized I could sing. I can remember going to see my sister in a musical when I was a little girl. So I decided to give it a shot. One year I was Danny Zuko, because I told them the only way I would do it is if it was Grease. Then I took up the guitar and began learning, and watching others play. It took off from there.

What was your first song?

One of the first songs I played live was Ronnie Dunn’s “Cost of Livin’.” I was 14, and it was after I had done those musical things. It was really my dad who pushed me to do it. For about six months I turned him down, then I just said, “Screw it, let’s go.” It was a bar called The Town Grille, and they called everybody and their mother, like 160 people packed into this place. It may have been built by my great-grandfather. There are many photos of my family, at least from my mother’s side, in the room. I did two Drake White songs and the room stopped when I played the Ronnie Dunn song. My dad was at the back of the room, and that was the first time I saw him stand there and weep. It was one those “Oh, s—” moments.

Now you are getting ready to open some shows at Brooks & Dunn.

It will be such an exciting moment. Ronnie [Dunn] is one of the most talented voices in our time.

What does your mom think about “Don’t Come Lookingin'”?

She adores it. I have written about my brothers and my father, but not about my mama. She said that she felt like the Disney mother for a long time.